The complete guide to: Athens Travel

Millions of visitors come to Athens every year to see the ancient sites like the Parthenon and other temples and ruins atop and around the Acropolis. But monument-hopping isn’t all you get in the bustling Greek capital. Definitely make a point of seeing the historic centre and all of its imposing archaeological wonders, but also make time to explore the city’s array of interesting neighbourhoods, all with their own personality and unique offerings. Athens is also home to some stellar museums, great food, a vibrant nightlife scene, and many festivals worth checking out depending on when you visit. If Athens is on your must-visit list, here’s a rundown of everything you need to know before you go and once you arrive. 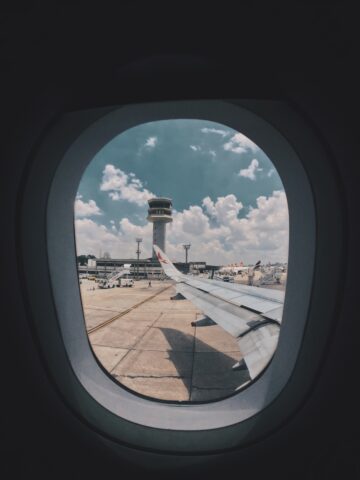 Getting to and from ATH

The Metro makes for an easy way to get to and from the airport. If you’re heading into the city, you’ll want to take Metro Line 3 to Syntagma Station (Athens’ centre). The trip takes around 40 minutes and trains run every 30 minutes, 7 days a week from 6:30am to 11:30pm. A ticket will cost you EUR 10, or you can buy a return Metro ticket for two trips to the airport in under seven days (if you’re on a shorter visit) for EUR 18.

Another option is to take one of the 24-hour express buses, which leave from the Arrivals hall. Tickets can be purchased on the bus or at the info/ticket kiosk which is located outside the Arrivals hall between Exits 4 and 5. Tickets are EUR 6 and the X95 gets you to the city centre, which takes 70 minutes. 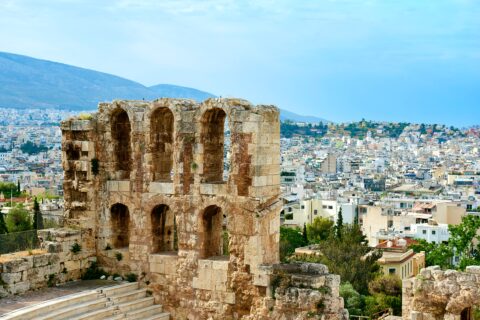 If you plan on taking a taxi, taxis are available at the designated taxi waiting area at Exit 3 of the Arrivals level. A taxi from the airport to the city centre will cost you a flat rate of EUR 38 from 5am to midnight, and EUR 54 from midnight to 5am.

Athens has an extensive public transportation system that includes the Metro, city buses, tram, electric trolley buses, and suburban railway. Most transport runs from 5am to midnight with the Metro running until 2am on Fridays and Saturdays.  A 90-minute ticket for use on all modes of transportation is EUR 1.40, a 24-ticket is EUR 4.50, and a 5-day ticket is EUR 9. Just note that the all-mode tickets can only be used on the urban section of the suburban railway (Piraeus – SKA and Magoula – Koropi).

During 2017 and 2018, the Athens transport ticket system has been transitioning from paper tickets to modern electronic tickets with the use of plastic smartcards (similar to London’s Oyster cards). If you plan to travel to Athens during 2018, check the Athens Transport Tickets and Cards website for the latest updates on how to use the new electronic tickets. 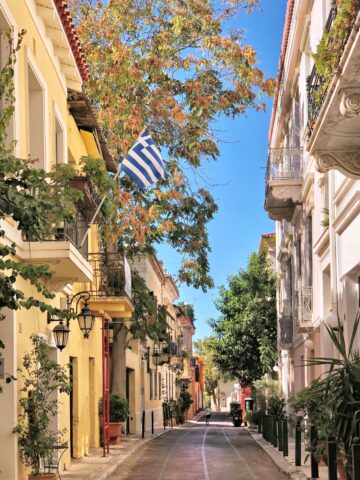 If you like walking, much of what you’ll want to see is in Athens’ city centre, making getting around on foot an easy option for hitting major sites. In particular, a large section of the city’s historic centre has been converted into a three-kilometre pedestrian zone, which takes you to many of the must-see archaeological sites.

Things to do in Athens

Start with the historical centre of Athens because you can’t come to Athens without seeing its major archaeological sites. Well, you can, but that would be a shame. The Acropolis and surrounding sites are all easy to see on foot and you can actually walk an entire circuit of the Acropolis and ancient Agora via that pedestrian zone we mentioned. From there, on and around the Acropolis you’ll see the Temple of Olympian Zeus, the ancient Theatre of Dionysos, and, once you reach the summit of the Acropolis, the Temple of Athena Nike, the awe-inspiring Parthenon, as well as gorgeous views over the city. You’ll want to start this journey either very early (by 8 am) or after 5 pm to avoid the crowds. 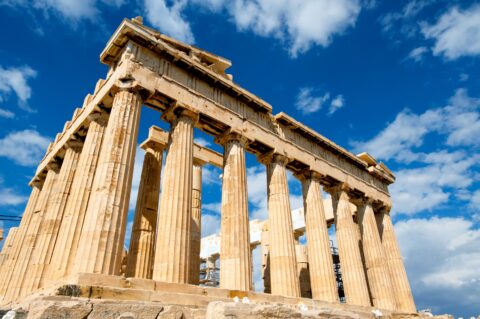 Don’t miss a visit to the architecturally stunning Acropolis Museum. As you walk in, don’t forget to look down. Below your feet, you’ll see a plexiglass floor through which are the ruins of an ancient Athenian neighbourhood. Three floors are home to numerous ancient statutes and Greek antiquities.

If you need a few more museums to add to your itinerary, several worthwhile culture-hopping stops include the Museum of Cycladic Art, the Byzantine and Christian Museum, and the Benaki Museum, all of which can be found in the upmarket Kolonaki neighbourhood.

Take a break from history and culture with a wander through the winding streets of Pláka, the oldest district in Athens. Here you’ll find tons of bars, cafés, and restaurants along with the chance to do some shopping. 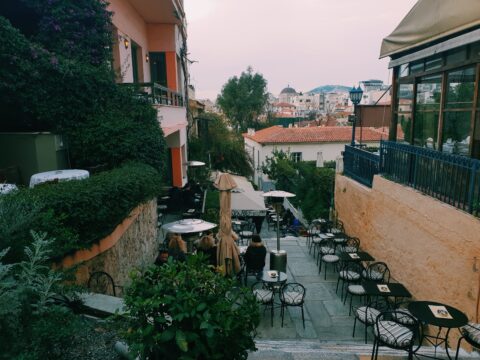 Athens is also home to many festivals, many of which take place in the summer. One of the most popular is the Athens and Epidaurus Festival, which takes place from the beginning of June through the end of August. The world-famous cultural event combines music, dance, opera, and theatre. Another great option for festival-goers is the Athens Open Air Film Festival, which takes place from June to September. Films are screened all summer in historical sites across the city and best of all, entrance is free. 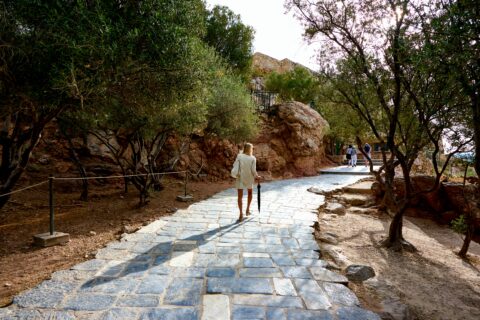 Greece is the type of place where you can see ancient ruins while on the Metro – no biggie! Join this Athens tour to do this as well as sip ouzo, admire old and new architecture, and see a traditional Greek changing of the guard ceremony.

Athens makes travelling easy; the streets are filled with cultural, historic, and culinary icons. The problem is knowing which streets. Join this Athens tour to enjoy the benefits of having a local guide who will show you fresh produce, retail hot spots, ruins, temples, markets, and mosques.

See the ‘big five’ of Greek cuisine in their natural habitat: ouzo, feta, olives, olive oil, and koulouri! If you don’t know what koulouri is you soon will as this Athens tour explains it all live as you eat it (but not before you Instagram it).

Bohemian Tales of the City

Take a detour down Athens’ back alleys and into neighbourhoods you won’t find in guidebook pages! This is alternative Athens, where bohemian shops, amazing street art, hidden courtyards, and indie cafés attract locals — and travellers who want to escape the tourist traps.

Athens at night can transform even the most sceptical romantic. Come experience a completely different side to the city as you walk through its historical centre and bustling neighbourhoods after dark. Listen to urban stories and myths, sample the best local spirits, and try mouthwatering finger food, in an Athens only known by locals!

Made In Athens Shopping Tour

Uncover a hidden community of Athens, one that is made up of artists, artisans and craftspeople. Athens has often been described as one of the most “alternative” cities in Europe, so you won’t be short of interesting encounters and sights on this tour! Explore open markets dedicated to antiques and shop for souvenirs that are so much more interesting than fridge magnets – and that, of course, comes with a story of their own.

Discover Athens’s most famous landmarks with a professional photographer to teach you how to get postcard-quality photographs. Venture off the beaten track to explore the equally vibrant counterculture, often missed by tourists. Capture exceptional images of imaginative modern graffiti and colourful street scenes that contrast beautifully with the city’s classical architecture.

Meet the new generation of Athenians and check out how the city centre has transformed into a lively hub due to its creativity throughout the financial crisis. Join us for this absolute hipster tour and discover Athens’ modern street food scene, its hip coffee bars and its edgy art and meet some of the people behind this cultural wave. This is New Athens!

Get to know Athens through its culinary traditions. But don’t expect to eat moussaka and feta on this tour. Take a deep breath and get ready to try some extreme local bites — only those with strong stomachs need apply. Show yourself how brave you are by doing as the locals do and tasting some lesser-known traditional treats.

Want to join the in-crowd and enjoy a night out in the most stylish district in Athens? Leave your flip-flops at home, dress smart-casual and get ready to wander with the beautiful people as we sample gourmet snacks and try special drinks and signature cocktails in some of the most sophisticated bars and restaurants in the city.

Get off the beaten track with a visit to Exarcheia, and see for yourself why it was selected among the coolest neighbourhoods of Europe. With an experienced local guide, you’ll explore the neighbourhood where anarchists, students, intellectuals and artists prefer to live.

Athens on the big screen

Some movies you can seek out to get you in the mood for a visit to Athens include My Life in Ruins, Boy on a Dolphin, and Never on Sunday, the last of which stars Athens-born actress Melina Mercouri, who was nominated for an Oscar for her role in the 1960 film.

One of the most recognisable names in Greek music has to be Yanni. The Greek composer’s first live album, “Live at the Acropolis,” was recorded at the Herodes Atticus Theatre in 1993.

Pick up copies of Apartment in Athens by Glenway Wescott and 92 Acharnon Street: A Year in Athens by John Lucas for some pre-trip reading.