When asked where is my origin, I state: Greece, and almost always get the following answers.

Oh, the Acropolis,
I love “tzatziki”,
I have partied all night at Mykonos,
I want to get married on Santorini.

And yes a smile forms on my face but immediately my tongue starts rolling and mentions a list of many of Greece’s lesser-known natural wonders, authentic towns and archaeological sites and islands that are just as stunning , not to say even more– and have many fewer tourists, allowing for a more intimate experience of what I consider as the Real Greece.

These outsiders of the package holiday are not failures. The loser becomes the winner, when they manage to stay out of the grounds of the beer consuming hordes.

If you are an avid traveler looking for destinations off the beaten track then continue reading.

These places offer quiet and tranquil holidays , so if you are looking for serious nightlife and dancing on tables , then stop here.
These destinations mostly attract upmarket tourism and travelers who love to discover new places,and Greece is littered with ruins, coves, little islands and quiet villages that you’ll never find in tourist literature.
If you are in the mood to explore more of Greece and have a slice of paradise, the destinations that follow are teeming with authenticity and a flair of old Greece.

Mani, the wild west of Greece

Mani is the southernmost and middle peninsula of the Peloponnese region.
Its the central peninsula of the three which extends southwards from the Peloponnese in southern Greece. To the east is the Laconian Gulf, to the west the Messenian Gulf. The peninsula forms a continuation of the Taygetos mountain range, the western spine of the Peloponnese.
Its here that continental Greece and Europe ends, next to a lighthouse that warns ships to steer clear of the cliffs of Matapan and Cavo Grosso.
A mystical place where the Poseidon’s Oracle of the deads can be found in a small and isolated cave as referred by Pafsanias and Plutarch, the mythical entrance to the underworld. It is a wild landscape and maybe nowhere in Greece does a region seem so close to its medieval past.

It is mountainous and the soil is mainly made of marble.This scarce of trees land and its dramatic scenery has formed the independent nature of its inhabitants who are well known for their bravery and their revolutionary character.
Genuine descendants of the Spartans they were never totally subjugated to any of the occupiers, but have a strong sense of hospitality as anywhere in Greece.
Until recent years many Mani villages could be reached only by sea but nowadays all of them are accessible by car. Narrow winding roads have been built along most of the coast giving everyone a good reason to visit this arid piece of land which drops into crystal clear waters, a rocky landscape full of Byzantine chapels, towered villages and tales of lawless chieftains and pirates .

The Dodecanese Islands are different from their siblings in the rest of the Aegean. Wild natural beauty combines with a slightly lower tourist burden to create a unique vacation environment. Carpathos or Karpathos is the queen of these lesser-known islands.
Karpathos, the second largest island in Dodecanese,is situated in the Aegean Sea between Crete and Rhodes, it is spectacularly beautiful, with wild, rugged landscape, mountainous in the north and fertile in the south, with wildflowers , it is a paradise for naturalists.

With mountains rising above 1,200 metres, forested areas and excellent beaches, Karpathos has some of the most attractive and dramatic scenery in the Greek islands.
It is an island rich in culture and traditions. Till now residents preserve intensively the old traditions of the island. No such other place in Greece has saved so much living traditions like the village Olympos in the north mountain of the island.
With so much living tradition on the island, Karpathos music is particularly vivid and haunting, and will ring in the ears long after the visitor has traveled to some sunny crowded island elsewhere in the Aegean. Here, musicians are respected community leaders. Since the island has often been isolated, they often have the skills to make their own instruments as well.
On Karpathos, the windmills still put in a full day’s labor, and don’t have the luxury of being merely decorative like their famous Mykonian counterparts.

Beauty on the wild side-Epirus

Greece is not only about island hopping. Although the mainland is not as famous as the Greek islands for holidays, visitors who dare to go off the beaten track are eventually impressed with the different landscapes and the many opportunities that the diverse and unspoilt region has to offer .
Epirus is a land of bridges and rugged landscapes.
From Metsovo to Ioannina and the summer resorts of Parga and Syvota, Epirus is a crossroad of landscapes.It is the cloud-covered crown of Greece, west of the Ionian sea and east of the long rocky spine of the towering Pindus mountain range. 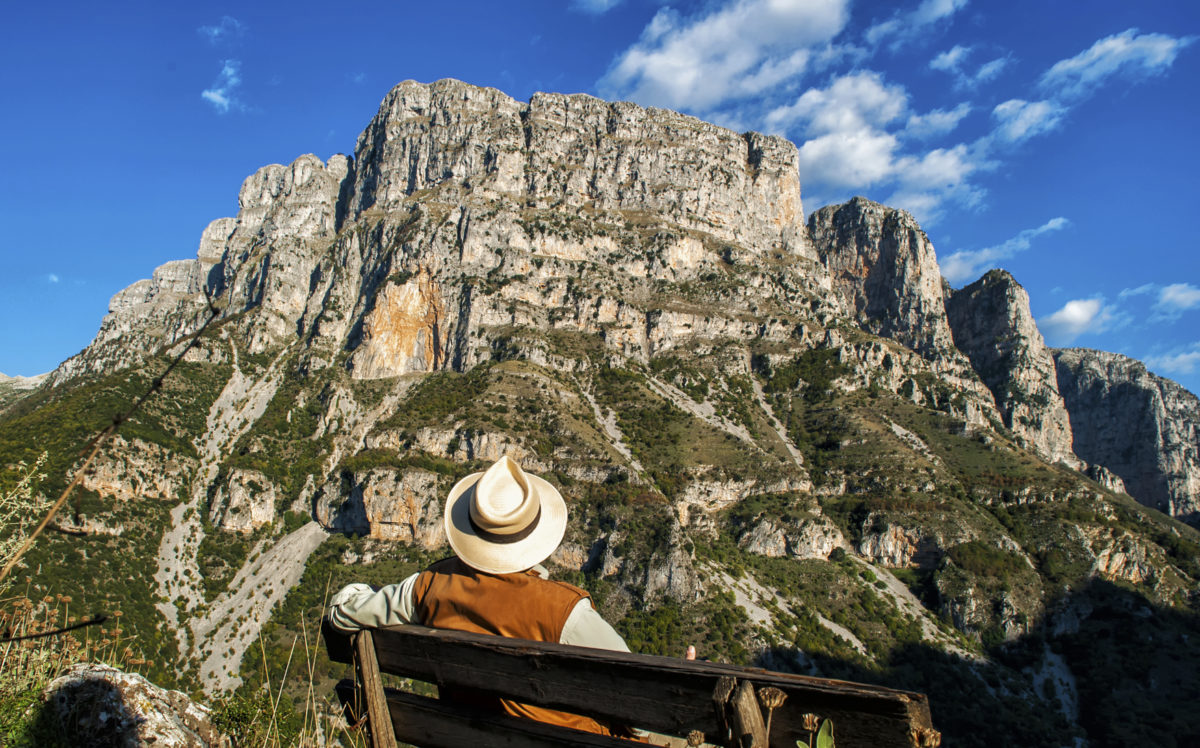 Home to one of the most spectacular natural sights in Europe , The Vikos gorge .It lies on the southern slopes of Mount Tymfi , with a length of about 20 km, depth ranging from 450 m to 1600 m and width from 400 m to some metres at its narrowest part. Vikos is listed as the deepest gorge in the world by the Guinness Book of records among others .
Mountain peaks, gorges, rare plants, herbs and mushrooms, lakes, rivers and stunning sandy shores; and among them medieval castles, monasteries, old stone bridges and stone built villages.
I hope I have given you enough teasers to either plan next year’s holiday or, immediately abandon the city , head to the airport and get on the first flight departing to the blue Aegean waters.
But before you start packing your bags, take some time to read some of my favorite tips for traveling to Greece which will make your holiday even more unforgettable.

1)These destinations are less easily accessible than the popular holiday destinations and it can take many hours on a slow lousy ferry to reach them. Buses and trains often leave you waiting, so half an hour means an hour and a half, one hour means three. Chill out. You’re in a beautiful, warm, laid-back place.

2) ATM’s are almost everywhere. But do have cash on you because you will not easily find them on small islands and some restaurants accept only cash.

3)Smoking mountains. Greeks smoke and they smoke a lot. This can be very annoying to non-smokers and difficult to avoid as it’s almost permitted everywhere.

4)As the Greeks are much bonded with religion, there are plenty of chapels in all towns and islands. In fact, there is a particular dress code to enter a church or a monastery. Visitors should be properly dressed, which means no swimming tanks, long trousers for men and long skirts for women.

5)Greeks are friendly people. The Greeks will be more friendly and eager to help if you try to speak some Greek, too. Just a couple of words are fine, they love it when they hear a stranger speaking their language. So, say kalimera instead of “good morning” and efxaristo instead of “thank you”, and you will see some big proud smiles on their faces.

6)Hand communication. A very common gesture you will definitely see in Greece is moutza: hand extended, five fingers open. This is a very rude gesture to show disapprovement and frequently used by drivers. Do not do that gesture, the Greeks will consider it very offensive.

7) If you are invited for a coffee be prepared to sit and socialize for hours. Normally the Greeks spent around two hours for a “coffee”.

8)Flushing toilets. When visiting the bathroom in Greece, please do not throw toilet tissue down the toilet, but put it in the bin provided, as the plumbing system cannot and will not cope with it. Failure to do this could result in it being returned to you, along with lots of stuff you REALLY don’t want!

9) It’s all Greek to me… Learn some common phrases in Greek.
Greek is not an easy language to learn. But no one expects you to know how to spell the words. Although many Greek speak English enough to be able to help with directions and what to order at a taverna, being able to greet, thank and ask for simple stuff in Greek is a good idea.
The first phrases to tackle are:
Kalimera (good morning)
Kalispera (good evening)
Kalinihta (goodnight)
Yia sou (hello)
Andio (bye)
Efharisto (thank you)
Parakalo (please)
Endaxi (OK)