So you’ve made it to Crete, and you’ve decided to check out Rethymnon — one of the most picturesque cities on the island. Rethymnon is a small city, but like all cities that carry thousands of years of history, you need to know where to go and what to see — especially if you only have 24 hours to do so. Check out our suggestions on things to do in the city, and maximize your precious time!

If you’re arriving in Rethymnon early in the morning, start your day with a Greek coffee at one of the many waterfront cafés opposite the Venetian port. These cafés cater to a variety of tastes and preferences, so you’re sure to find something you like. We also suggest walking toward the Fortezza for views of the fortress and the sea.

For those who are looking for more culture, visit a kafeneio (traditional local café), for a more authentic Cretan experience, and watch the sunrise from the Cretan sea as you get your caffeine fix.

Your next goal will be to explore the Venetian fortress, called Fortezza. By now, you will have seen it standing proudly on the hill behind the cafés. The fortress gate opens at 8am in winter, and at 8:30am in summer. The ticket costs EUR 4 and you can purchase it at the gate. You will need a couple of hours to walk around the Venetian-era citadel, where you can admire not only the breathtaking views of the city and the coast but the important buildings inside the walls too. Some buildings are still being restored but a walk around will give you a peek into life in the Fortezza during Venetian times. 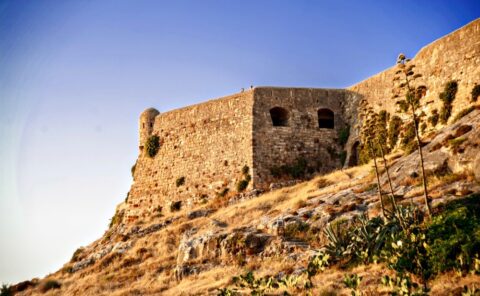 Explore. By now you will have seen it standing proudly on the hill behind the cafes. the Venetian fortress or “Fortezza”

By now, the sea breeze and your walk will have definitely increased your appetite for a good lunch. Continue walking past the fortress entrance and you’ll find yourself in the streets of the old town. The old town of Rethymnon is one of the best-preserved towns of the Renaissance, and it is the heart of the modern city that surrounds it. Walk back in time, past buildings and monuments that combine the oriental features of the Turkish occupation with the Venetian Renaissance architecture. Today, the old town of Rethymnon is a living museum of monuments from centuries past. Find a restaurant that will satisfy your taste buds and sip on local raki or tsikoudia (a local spirit).

Despite the devastation suffered during World War II, many Venetian and Turkish monuments still remain intact, making Rethymnon one of the most picturesque cities in Greece. 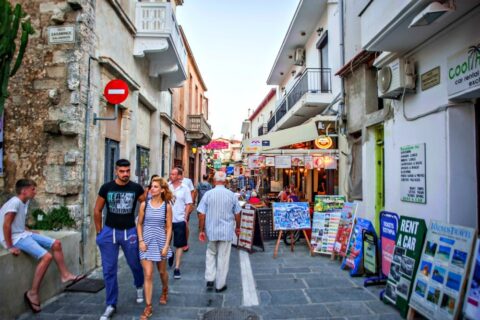 Check out the old town of Rethymnon, one of the best-preserved towns of the Renaissance

If you want to take part in our next suggestion, try to have an early lunch, as the Historical and Folk Art Museum of Rethymnon closes its gates at 2:30pm. The museum is housed in a 17th-century Venetian mansion, so take a minute to visualise the history of the region. Alternately, if you prefer to relax and enjoy a dessert after lunch, there are many interesting options to choose from. One of them is to explore the old town’s historical landmarks.

Visit the Church of St. Francis, which is one of the most important examples of Renaissance architecture in Rethymnon. In the centre of the old town, you’ll find the Rimondi Fountain, which was built by the Venetian governor J. Rimondi in 1626. Don’t leave Rethymnon without visiting the Neratze Mosque or the Church of Santa Maria, as this building had a dual life during Venetian times.

Another great option is to pay a visit to the Arkadi Monastery. The monastery is on a low plateau, 23 kilometres from the town of Rethymnon. Built during the last Venetian period, it consists of a large set of fortress-like buildings and contains one of the finest Venetian churches on Crete. But apart from being an architectural jewel, the monastery is a symbol of Crete’s heroic struggle for independence. Rethymnon’s Old Town is a well-preserved maze of narrow streets where the Venetian and Ottoman past can be seen all around. 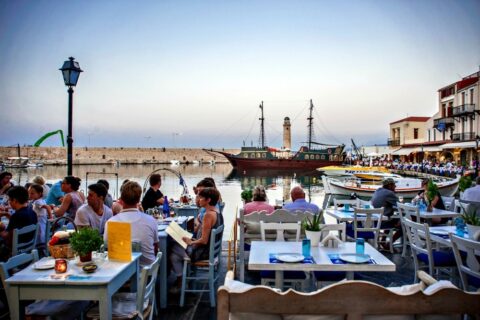 If you’re arriving early, start your day off with a Greek coffee at one of the many waterfront cafes opposite the Venetian port. If not, the waterfront is a great place to go for a stroll!

The island of Crete is famous for its liveliness and the unique nightlife that it offers — and Rethymnon is no exception. The city is a charming carousel of images and experiences. You could continue your exploration of the city by strolling along the waterfront or do some last-minute shopping, as most shops in the old town remain open until late at night. For a memorable experience, participate in a wine-tasting event hosted at Veneto Hotel, an old 14th-century Venetian manor house, or enjoy a meal in one of the taverns or restaurants that line the streets.

Enjoy the sunset views while drinking your coffee or a glass of wine on the picturesque Venetian port. If you were hoping for a quiet night and would like to experience rural life on Crete, visit Atsipopoulo Village, just five kilometres from Rethymnon, which is listed as a traditional settlement. You will be amazed by the numerous churches, the beautiful arched paths, and the traditional stone houses. You can also enjoy a good meal at one of the taverns in the centre of the village. To visit Atsipopoulo, take one of the city buses.

Rethymnon doesn’t have an airport, so if you intend to fly to Crete, your destination airport will be either Chania or Heraklion. The city of Rethymnon is located an hour’s drive from both cities. There is thorough public transportation to Rethymnon from both cities. We’d recommend that you have at least a 6-8 hour layover in order to see everything at a decent pace. If you only get to see one thing, we’d recommend checking out the Venetian Port and exploring the old town.